These are crucial, and for so many reasons. First of all, it is a matter of courtesy: collections care for their materials, and digitize them, at great expense. They then give them away for free for me and you to reuse as we like. A little hat tip, I always feel, is the least I owe them. Secondly, it is a way for people to follow up where you got the picture from; if I can entice one person to browse through a manuscript online, my job is done. Thirdly, it is a way for myself to be able to find things back when I want to, sometimes at a much later date. Fourthly, there is this: it’s history, not a viral feed! Finally, I don’t begrudge angels their slice of pizza.

whenever you retweet a manuscript image w/ proper identification and a link to the source, an angel eats a slice of delicious pizza for you

Collection references can come in many forms. Over time, I have developed the following practice – this is my current personal practice, but I don’t suggest it is best practice, and I am open to suggestions for what I could do better. Some of the choices come down to a balance between being thorough and making appealing picture tweets within the character limit. That said, because of all of the above, I personally feel there is never a reason not to include a collection reference which outweighs all the reasons there are to include it.

So, at a minimum, I include, on the picture itself, a collection reference and shelfmark, often abbreviated, but enough to make it clear. So, for example, ‘Bibliothèque nationale de France, Département des manuscrits, Français 2664’ can become ‘BnF Français 2664’, or anywhere in between the two – enough to identify the manuscript, even if not a proper full shelfmark. I prioritise this reference over all other references because it has been my experience that people take images (and tweets) and recirculate them, stripping them of any reference information you have included in the tweet. So, you may have included a link and collection reference, but the image starts circulating without the information (but with the joke you made!) regardless. I hope that including the shelfmark on the image makes it a little less likely for the collection reference to get lost. I use a simple image editor (Mac Preview) to add the reference.

Additionally, if nothing else, I always tag the collection’s twitter handle to the picture, if they have one. That way people can follow up, and the collection can see what is being done with their material.

In many cases, I also include the collection handle, the shelfmark reference, and regularly also a link to the digitized version. If I do the latter, however, I don’t do it specifically so people can admire the detail I have tweeted – I have, after all, already tweeted that; I do it in the hope that someone will take the time to browse through the manuscript. So, to make that a little more likely, I link to the whole work, not to the page view. This is also a reason why I don’t include a folio number in my references: except when a tweet has specific scholarly purposes that require one, I feel the collection/shelfmark suffices.

Sometimes, however, tweets can start to feel clunky when they include too much information; a simple collection/shelfmark reference, in my experience, is rarely ugly, but also including a link can sometimes make the metadata overbearing. For that reason, I regularly omit the link, although I still feel best practice is to include links. Also, I feel bad for the angels, whom I’m depriving of pizza.

Besides collection references, I have a little while back started to include a further type of metadata: descriptive information. This is a functionality twitter has introduced not so long ago, which you can use to make your picture tweets more accessible for people who are visual impaired. It is only readable via dedicated assistive technology. You can learn here how to turn on this functionality. I hope it is useful to people who access my tweets through assistive technology, and have once done a twitter poll which suggested it was indeed useful to some. I do not know, however, whether the descriptions that I give are any good, and would be very grateful for any feedback any users could give me.

So, this is my personal practice at the moment – it is very much subject to change, as twitter slackens its character allowance, and as I meet new issues, or am persuaded to improve. What is your practice, and why? And, as a reader of my tweets, what more (or less) would you appreciate to see me include?

P.S. One note on what I really appreciate from other picture tweeters: answering queries. It is the hallmark of a caring tweeter, versus the medievalreacts of this world.

Addition, 13 December 2016: Today, the Facebook Middle Ages group ‘British Medieval History’ shared a post which included my find of a little illustration I had come across in the margin of a digitized manuscript from the Bourg-en-Bresse Bibliothèque municipale (MS 7). The illustration had reminded me of the tauntauns from Star Wars, and I had tweeted it with a still from the movie:

just when people say #DumpStarWars I found a medieval drawing of a tauntaun from Hoth, ridden by a man with a lightsaber#MedievalStarWars pic.twitter.com/KpwyXrjDRe

In this particular case, I had prioritised the images and my comment, and not included the collection reference and shelfmark in the tweet. I had, however, included it on the image itself (which, as I describe in the post above, is my minimum). I had been unable to find the Bourg-en-Bresse library on twitter, so could not include their twitter handle. I had, however, done quick twitter and google searches to see if anyone before me had identified the image as Star Wars-related (as far as I could verify, no one had); you can check #MedievalStarWars on twitter to see other examples of medieval illustrations that appear to show Lucas’ work.

A user named Dave Pilling added an earlier mockup of the ‘medieval Yoda’ with actual Yoda, and said he had ‘stumbled across a new one’ (meaning the tauntaun I had found and identified), posting it to the ‘British Medieval History’ Facebook page: 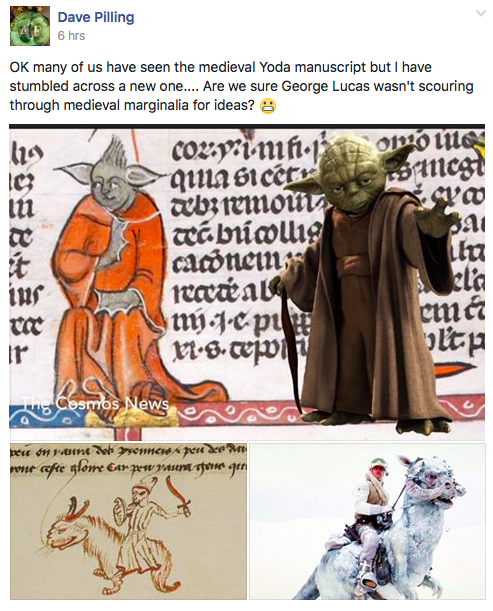 The Group admins then posted on twitter, saying ‘now I’ve found this’: 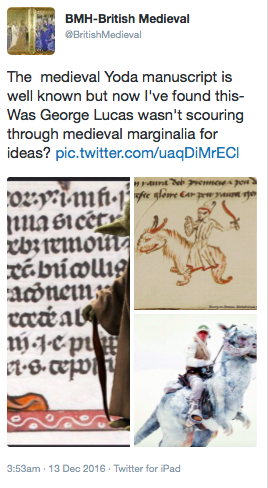 Of course, they hadn’t found anything – I had shown it to them, in my tweet. They have now unreservedly apologised and added an acknowledgement. But the affair confirmed one important thing: adding the collection reference and shelfmark to the image itself (rather than only mentioning it in my tweet) makes it more likely to be retained when people reappropriate images you’ve tweeted; my find may not initially have been acknowledged, but the reference was still there, on the image of the medieval manuscript tauntaun I found: